Alisea Esco S.A. manages in a joint venture with indra sistemas s.a. the mixed contract for the supply and energy services and integral maintenance with full guarantee of the public lighting, traffic lights and fountains installations owned by the city council of Jaen. 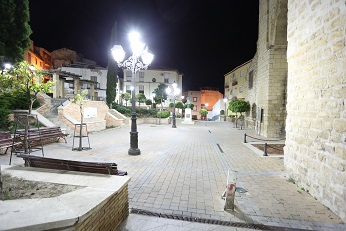 The Mayor of the city of Jaén, José Enrique Fernández de Moya, together with the Councillor for Finance and Communication, Miguel Contreras, the Councillor for Urban Maintenance and Citizen Participation, Manuel del Moral has reported on the recent mixed contract for supply and energy services and comprehensive maintenance of public lighting, traffic lights and ornamental fountains owned by the City Council that has been awarded to the joint venture Alisea ESCO/Indra.

This service has been awarded for 3.8 million euros, which will mean a very significant saving for the city of Jaén of 33 percent, i.e. 1.8 million less than the previous contract.

The mayor explained that until now “the average cost of the previous contract, including energy costs, was around 5.5 million euros. The tender was put out for 4.7 million euros and the contract was awarded with a 17.9 percent reduction, i.e. a saving of 947,422 euros. He added that “what cost us 5.5 million, now, after the award, will cost the people of Jaén 3.8 million euros, that is to say, a saving of approximately 1.8 million euros”.

“The awarding of this contract also shows that we will be the first provincial capital in Spain to implement a contract with energy service companies,” he applauded.

The contract is awarded for a period of 16 years for 3.8 million euros and the joint venture will make an important commitment to the city, which will save around 24 million euros over this period. Investments of 13 million euros will be made during the term of the contract, with the replacement and renovation of more than 17,000 luminaires with LED technology, that is, the renovation of 93 percent of the total number of luminaires in the city.

The award contract also includes a Communication Plan for an amount of 100,000 euros, as well as the sponsorship of extraordinary lighting at Christmas and the Fair for 80,000 euros per year.

It should be noted that the City Council’s investment is 0 euros and that it is the company awarded the contract, in this case Alisea ESCO-Indra, which assumes the entire investment over the 16 years of the contract.

More than 60 percent of this investment will be carried out in this first year, which means that in 12 months the city of Jaén will have completely new, more energy-efficient lighting. Metering control systems will also be installed and CO2 emissions will be reduced.

This website uses cookies to improve your experience while you navigate through the website. Out of these, the cookies that are categorized as necessary are stored on your browser as they are essential for the working of basic functionalities of the website. We also use third-party cookies that help us analyze and understand how you use this website. These cookies will be stored in your browser only with your consent. You also have the option to opt-out of these cookies. But opting out of some of these cookies may affect your browsing experience.
Necessary Always Enabled

Any cookies that may not be particularly necessary for the website to function and is used specifically to collect user personal data via analytics, ads, other embedded contents are termed as non-necessary cookies. It is mandatory to procure user consent prior to running these cookies on your website.